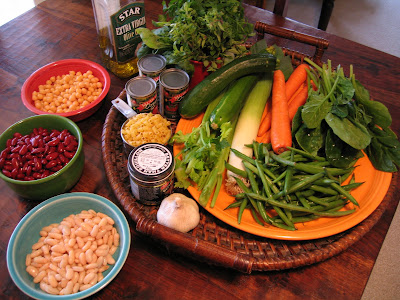 I spent a good bit of time thinking about which recipe I should use to launch this website. As I scanned the different candidates I quickly realized that the best way to kick-off a cooking blog called Bonzo Bean would be with a recipe that was full of beans. Beans are one of my favorite foods and this recipe has garbanzo, cannellini, kidney AND green beans. This Minestrone is the soup I make most often and I really enjoy the process. There's lots of chopping and rinsing and browning; all those little tasks which really aren't so difficult in and of themselves, but are engaging enough to take your mind off most everything else. It also happens to be a favorite of my husband Al, the guy who helped name the website and my official taster, so I think it's only appropriate to include him in my first post.
Al and I both spent time working in Italian restaurants in our youth and we wanted to recreate the rich vegetable, tomato and beef flavors that we remembered when we thought of good Minestrone. For my part the spinach and zucchini are essential ingredients. I love the fresh taste of the spinach and the deep green color it lends. The chunks of zucchini are somewhat sweet and create a nice contrast with the beans. After years of tweaking I think we have nailed this recipe and in the process created a soup loaded with vegetables and robust tomato flavor, using a relatively small amount of meat.
When we first decided to make this soup we did what we often do, went online and searched for as many recipes for Minestrone as we could find. We debated the merits of each, culled our favorite ingredients, and then set about making our own version. We have probably made this soup 20 times and it never fails to please. The great thing about Minestrone is that it's flexible and you have a lot of room to play with the ingredients. Don't have everything on the list? Don't worry about it!
As with most soups that I make, I make a LOT. You have to invest some time prepping the vegetables and herbs, so why do all that for just one meal? I have never made a vegetarian version of this soup, but think it would be easily adaptable and still very good. Either way, it's a good way to spend a Sunday and you'll have a big pot of leftovers to help get you through the work week.
Ingredients
Olive oil to coat bottom of large soup pot or dutch oven, 2-3 T
Salt and pepper
1 lb. Stew meat
1 leek, thinly sliced (see tip below)
3 stalks celery, diced
3 cloves garlic, chopped finely or put through a press
3 carrots, peeled and diced
3 small cans tomato paste (yes it sounds like a lot, but it makes up the base of the soup)
2-3 large T of beef base (the dark stuff in the jar, I prefer Better than Bouillon)
Couple shakes of Worcestershire sauce
1 15 oz can garbanzo beans
1 15 oz can cannellini beans
1 28 oz can of kidney beans
(all canned beans should be thoroughly rinsed and drained)
2 handfuls fresh green beans, stem-ends removed and chopped in half on the diagonal
2 zucchini, diced
1 Parmesan rind (optional, but lends a really good flavor)
1 bay leaf
1 large handful fresh spinach, rinsed thoroughly, stems removed and roughly chopped
2-3 tablespoons each of dried oregano, thyme and basil (fresh is best if you have it, double the quantity for fresh herbs)
1 handful chopped fresh Italian parsley
1 c Ditalini pasta or small shell pasta
Water to fill the pot 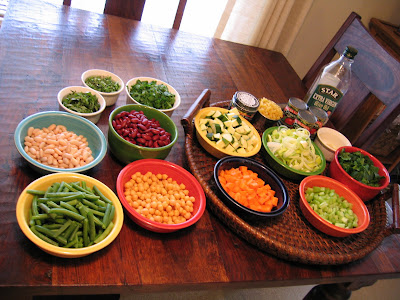 Leeks are very clever about holding onto their dirt and grit. I have found the best way to rid them of it is to slice the leek thinly and put the slices in a large bowl of cold water. Gently separate the slices into their individual segments while rinsing them in the cold water. The leeks will float to the top, dirt and grit will sink to the bottom. Once separated and clean, lift gently out to another bowl. 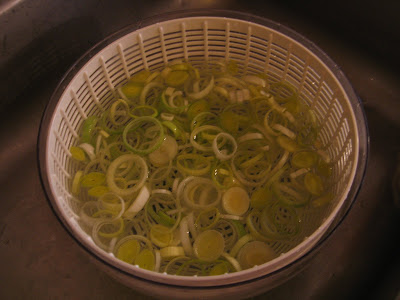 Spinach can also be exceptionally gritty so I typically rinse it 3 or 4 times by placing the spinach in my salad spinner. Fill the bowl and while the water is running swish the spinach around with your hands to dislodge dirt particles. Lift the colander portion of your spinner with the spinach inside, dump the water out of the bowl, and do it again etc... This step doesn't take long and is very much worth it if you dislike dirt in your soup.

Directions
Dry stew meat thoroughly with paper towels so that it will brown nicely and season with salt and pepper. Heat 2-3 T olive oil in dutch oven over med-high until hot. Add the meat to the pot in batches so as not to crowd it. Brown meat on all sides, about 2 minutes per side, then remove from pot and set aside. 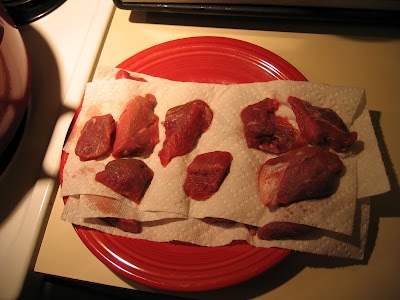 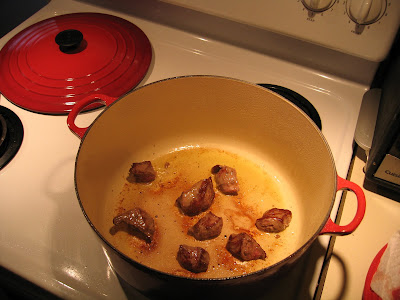 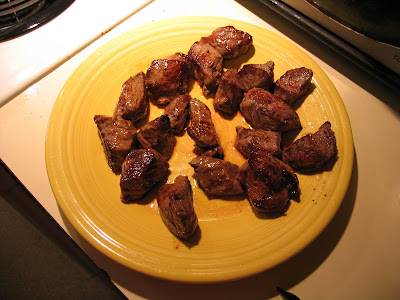 In the same pot, adding more oil if needed to coat the bottom, add leeks, celery, garlic and season with salt and pepper. 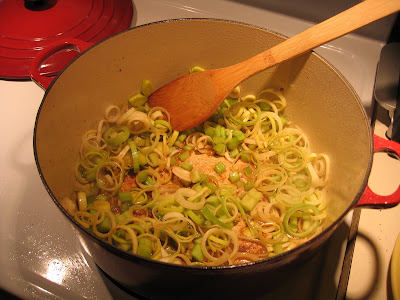 Cook on medium-high until leeks and celery are getting soft, then add carrots and cook a couple more minutes. Add tomato paste, Worcestershire and beef base. Simmer for a couple minutes to bring out flavors, stirring frequently to combine. 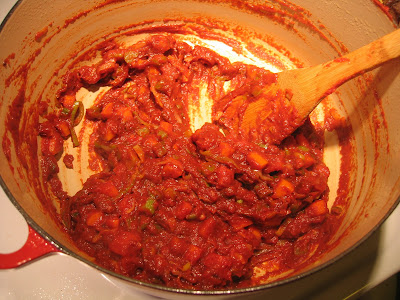 Add zucchini and all beans and stir again. 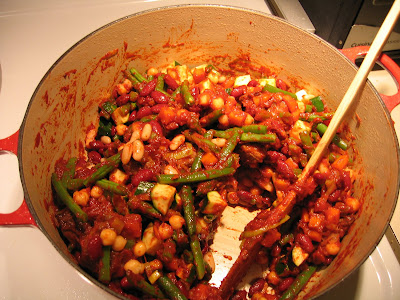 Add water to fill the pot, bay leaf and Parmesan rind. Bring to a boil for a minute and then reduce heat to a simmer. I typically let the soup simmer for a couple hours over medium-low heat, adding more water if needed as it cooks down. 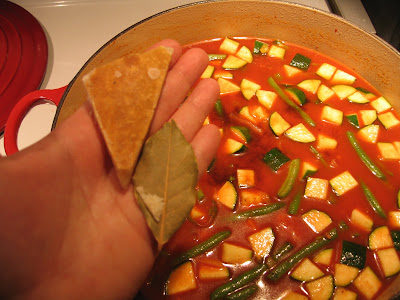 30-60 minutes before you want to serve the soup add spinach and any fresh herbs (reserving some of the parsley for garnish) to the simmering pot. 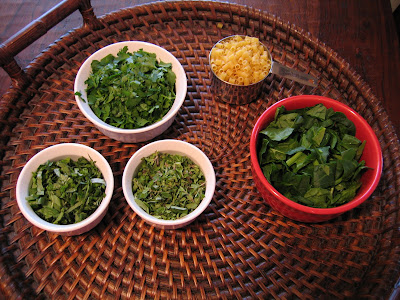 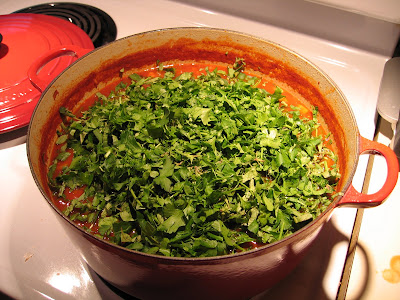 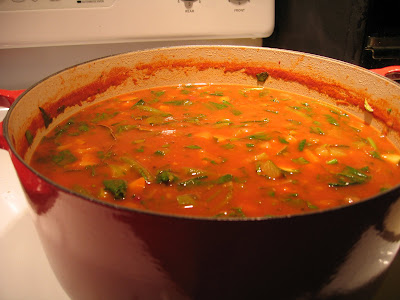 You could add the 1 cup of pasta directly to the soup at this point, but I prefer to cook the pasta separately so that it doesn't get mushy (particularly if you're going to freeze the leftovers). Cook pasta according to package directions for al dente, drain, place in a bowl with lid that you can store in the fridge. I will then ladle a little bit of soup over the pasta and stir to combine, this will prevent the pasta from sticking together. Before serving the soup put as much pasta as you would like in the bottom of your bowl and ladle the soup over the top. 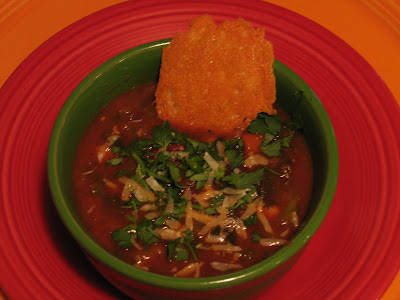 Storage: the soup will keep for several days in the fridge and freezes quite well. It is amazing on the 2nd day when reheated and the flavors have had a chance to marry.
Parmesan Crisps
Heat a non-stick skillet over medium-high heat. Put 2 T of Parmesan cheese on the skillet in a little pile. Don't touch it. Let cook for a couple minutes until the bottom has set and is golden brown. 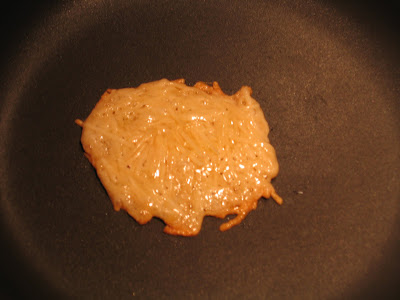 Flip the crisp and cook a couple more minutes until the other side is golden brown. 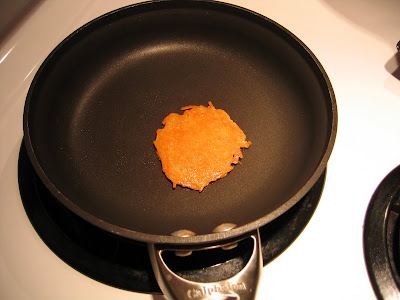 Remove from heat and let cool on a rack. 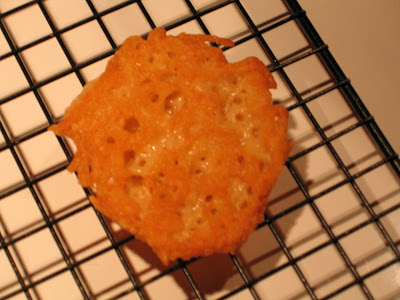 Repeat for as many crisps as you would like. These little crackers are fabulous with Minestrone and also go really well with Caesar salad. You can store them for several days in an airtight plastic container, but they won't last that long.