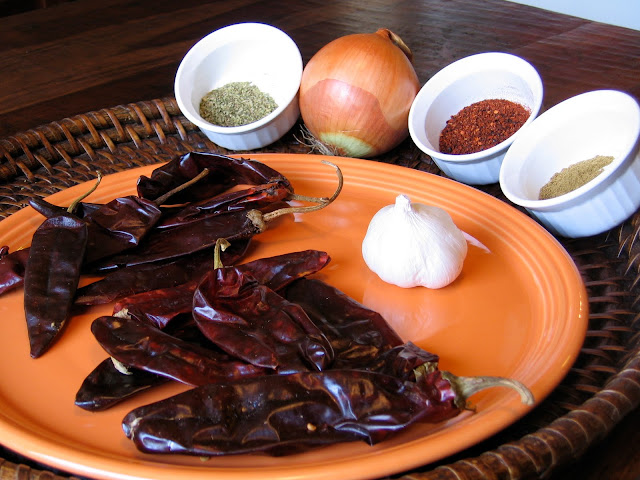 This weekend was a trip I didn't plan to take. I don't remember purchasing a ticket.  All of a sudden I had cleared security, stepped off the jetway onto the plane, and left the world behind. No turning back now, all systems are go, we are queued for take-off.  The thought occurred to me when I realized I had been standing at the stove browning meat for an hour. I thought to myself, "what am I DOING here, and how much longer until we land?"  The upside to cooking vs. air travel, the booze in my kitchen flows freely, and there's never more than one person in line for the bathroom. Before I knew it, I was past the point of no return, and we had started to taxi down the runway.  I poured myself a glass, tightened my apron strings, and buckled up for the ride.
It all started with a craving, like many a culinary misadventure. This craving was for Mexican food.  I've eaten my fair share of fajitas, which I love, but I wanted something a bit more genuine. Not just the average homemade taco.  I was flipping through recipes and came across Chile Colorado.  Beef or pork in rich, red, peppery sauce.  Simple, spicy, meaty goodness; to be slurpily devoured, its sauce sopped up with fresh flour tortillas. My stomach was making travel plans, my brain just hadn't caught up yet.
I've only made Chile Colorado once before.  It was a very long time ago, and I don't remember much, except that we enjoyed it at the time.  In my notes I read that I used "canned peppers with juice," but genius that I am, didn't note what kind.  Who knows where I'd end up with directions like that, Peoria? The recipe also included canned tomatoes, which as I've learned, are not a part of authentic Chile Colorado.  So the quest began.
I went online and quickly found this recipe; it seemed like a good place to start as it featured the key ingredients and was faithful to the no-tomato rule.  Then I kept looking and found this, which included garlic, cumin and oregano.  I knew I had used those spices the last time I made this Chile.  It was time to shop.
Based on the research, I became a believer in the following: to make an authentic Chile Colorado, I needed to start with authentic peppers.  I purchased dried Guajillo (bottom) and New Mexico peppers (top), as they were the ones referenced most often in the various recipes. 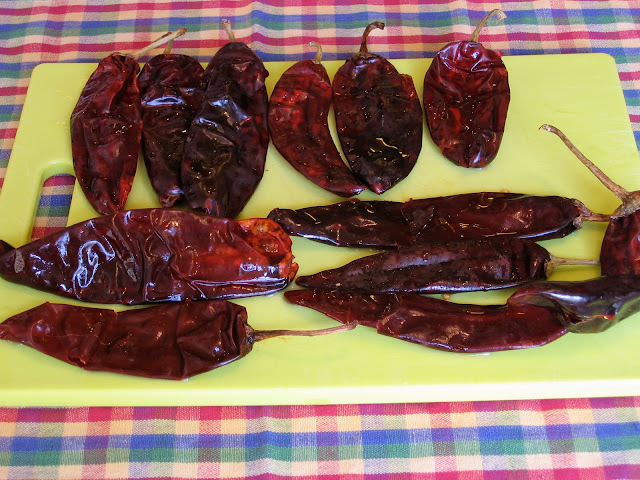 They looked very similar in the package; upon closer inspection, the Guajillo peppers were relatively longer, browner in color, and had a smokier scent.  The New Mexico peppers were shorter, redder and sweeter smelling.  I stuck my nose into the bags for a good whiff, and quickly understood the purpose for using both varieties.  Each pepper lends a different element to the sauce.
Now it was time to buy stew meat.  I'm as big a carnivore as anyone, but balked at the 5 POUNDS OF MEAT most of the Chile recipes called for. 5?? Insanity!! But when I thought about it, this recipe is just meat and sauce. That's it.  I know that meat cooks down, especially when simmered for 3 hours, as this Chile will require.  I also know, if I'm going to spend an entire day in the kitchen, it's not for one dinner (see Minestrone).  So I sucked it up, and dropped $25 on some really gorgeous, all-natural, grass-fed beef.  I'm sure there are cheaper options to be had (Costco), but I really love the meat at my new favorite grocery store.  This store also has unbelievably delicious, freshly-made, flour tortillas.  The perfect compliment to Chile Colorado.  Bonus!
My trip began with soaking the peppers.  They're dried, so I had to rehydrate them before making the sauce.  I should have removed the seeds and stems BEFORE giving them a quick rinse to rid them of debris.  I rinsed the peppers first, and quickly realized it would have been easier to remove the seeds had they been dry.  Had I, it would have saved me getting impatient, and using my fingernails to scrape the seeds out of the damp and sticky pods. This, I can tell you, will result in a mild, burning sensation.  It wasn't serious, but did prompt me to ask the flight attendant for another round.  I will also be picking seeds off the floor for a month. 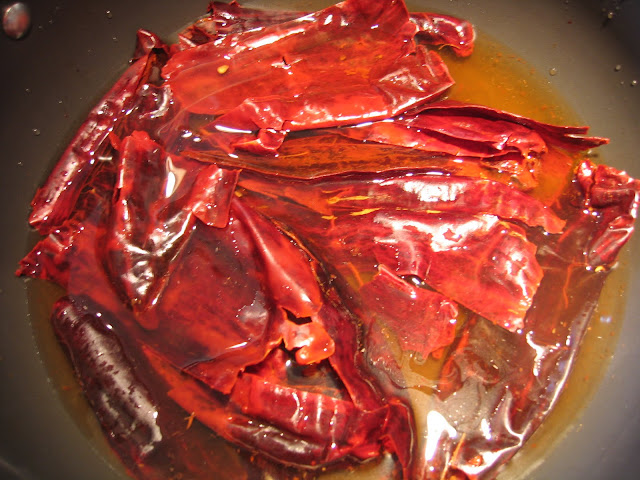 Once I removed seeds and stems, I put the peppers in a pan and covered them with water. I heated them over medium-high until just before boiling, then removed the pan from heat and let peppers steep.  Once they were cool enough to put in the blender, I drained them through a sieve to catch stray seeds, and reserved the cooking liquid. I put the peppers and about half of the liquid into the blender and processed until very, very smooth. 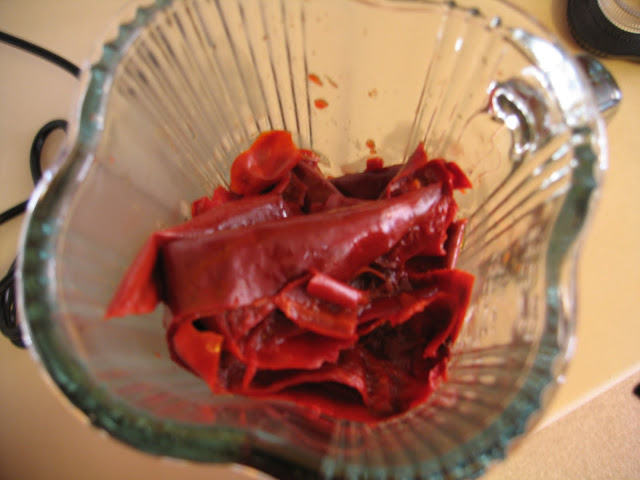 I ran the blended mixture through a sieve; pressing with a spatula to extract as much of the juice as possible, while leaving seeds and pieces of skin behind.  This step is key, the skins are very tough.  The resulting orangey-red, smoky, peppery sauce was the base of my Chile.
Browning the meat took about as long as it takes to fly from Seattle to Portland.  I'm somewhat torn on this step.  Part of me wants to skip it, but the better part of me knows that I can't, because I'd lose all that flavor. 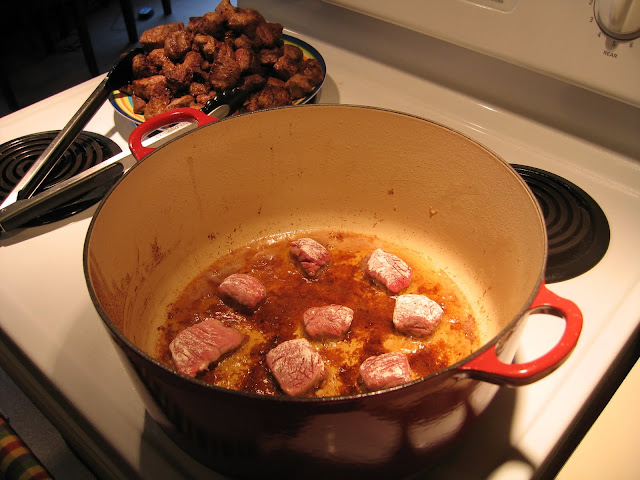 After a light toss in seasoned flour, I browned the stew meat, in batches so as not to overcrowd it.  The meat turned a gorgeous dark brown, and was seared to keep its juices safely within. 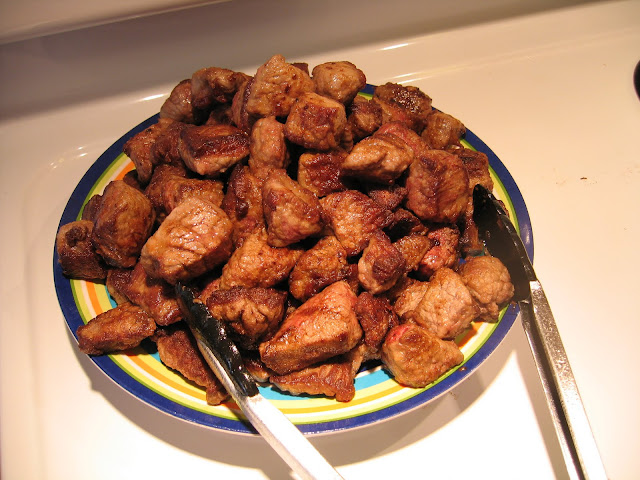 You might be able to skip this step, and still end up with a final product that was good.  I see the recipe translating easily to a crock pot; just dump everything in and set to low. Either way, I browned the meat as shown.  It took about an hour.  If I were to do it again, I'd have 2 pots going instead of 1.
When the meat was done, I ran a paper towel around the bottom of the dutch oven to remove excess flour.  I didn't want it to burn. Then I sauteed the onion for several minutes until it was getting soft and golden.  I added the garlic, sugar and cumin, and cooked a couple minutes more.  Then I added the pepper sauce and oregano, and stirred to combine. 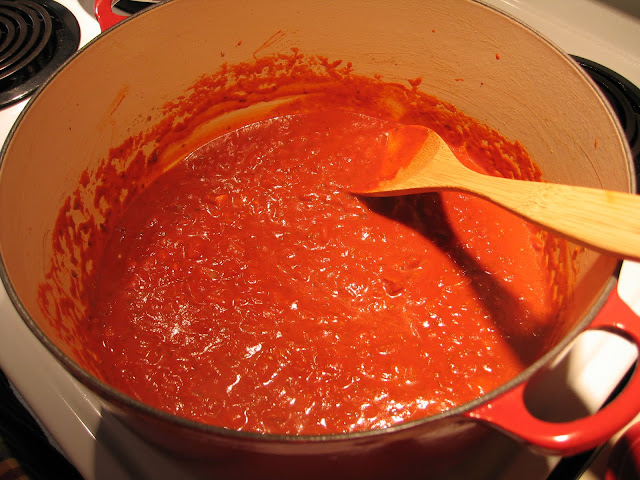 Then the browned meat goes in with 2 cups of beef stock and the remaining pepper-soaking liquid. 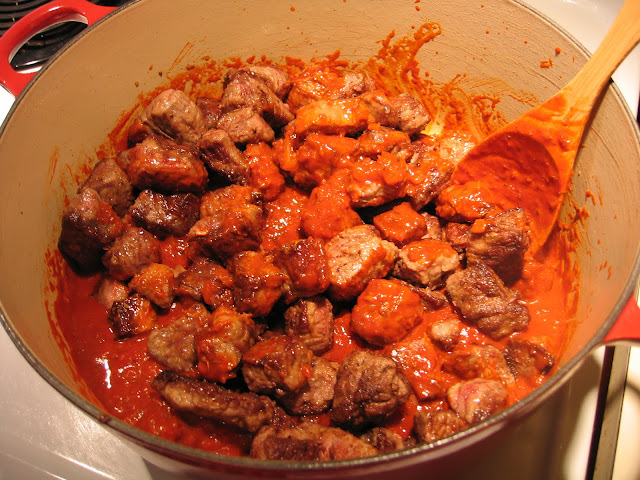 I simmered for 3 hours and watched the in-flight entertainment.  I wouldn't recommend skimping on time.  I've tasted the meat at 2, and 2.5 hours, and it gets more tender the longer it cooks.  The sauce also thickened as it cooked, in part from the flour in which the stew meat was dredged.  It smells and tastes deeply warm and spicy.  I wasn't able to stop tasting it.  I broke into the tortillas before I'd heated them, because I had to "try" it again...and again...and again.  The other passengers became restless, and started to pepper me with their pleas of, "are we there yet?"
After a good three hours I pried myself out of the too-small seat, retrieved my bags from the overhead compartment, and stretched my legs.  There wasn't much left to do but a quick round of tortilla warming.  I could have shredded some cheese on top, but the airline lost the bag.
After what seemed an exceptionally long day, I arrived at my final destination, bowl in hand.  As I ate, I thought of Mexico.  It was cold and dark in Seattle by the time the trip was through; there are no pictures of the happy homecoming.  However, I think your imagination will serve you well.  Just think of a red pottery bowl, warm in your left hand, spoon poised in your right hand.  Steam is rising up from the surface.  The bowl is filled with tender chunks of beef, swimming in a dark, reddish-brown, soupy sauce. You take a bite, and depart for warmer climes.
It was a long journey, but one I'm glad I made.  The Chile was so good I had it again this morning.  I served it over rice, with a fried egg on top, and a sprinkling of cilantro.  That easy and delicious breakfast more than made up for yesterday's labor of love. 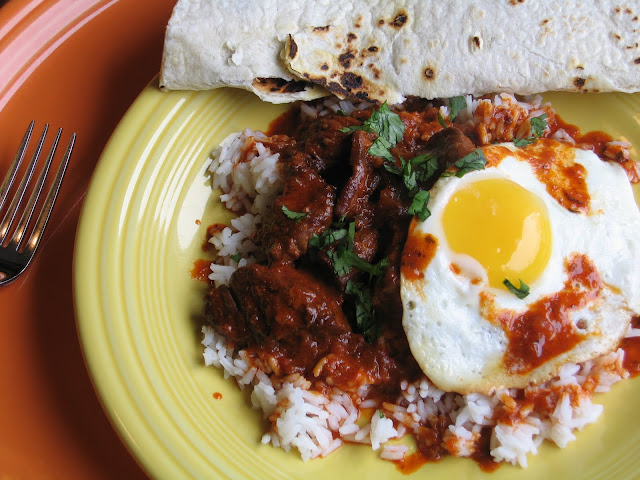 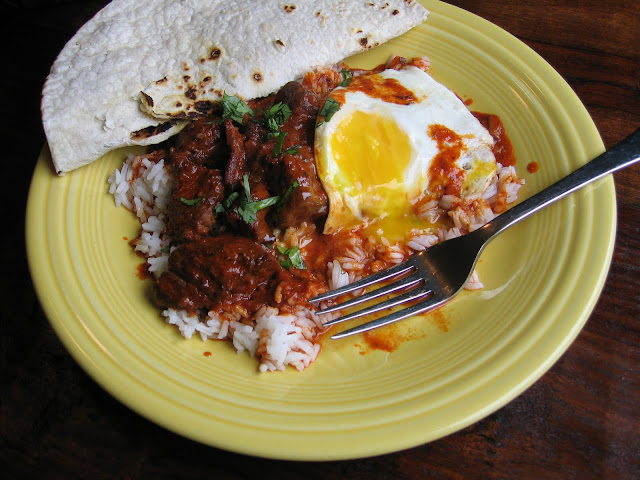 Bon Voyage and Bon Appetit!
Chile Colorado by Bonzo Bean
Ingredients
6 dried Guajillo Chiles
6 dried New Mexico Chiles
4 c water
1 c flour
1 t salt
1 T freshly ground pepper
5 lbs stew meat
Vegetable oil, several T to cover bottom of pot
1 large yellow onion, diced
3 cloves garlic, minced
1 t sugar
1 T cumin
1 T oregano
2 c beef stock
Reserved pepper soaking liquid
Fresh, chopped cilantro for garnish
Flour or corn tortillas
Optional: grated cheese, minced onions
Directions
Remove seeds and stems from peppers.  A tip I read (too late) said to use scissors to snip the stem-end off, then snip down the side of the pepper to release the seeds.  I think that would work much better than what I did, so try that, or use a knife.  Just do it while they're dry.
Put peppers in a pan and cover with water.  Heat to just before boiling, then remove from heat and let steep for 30 minutes, until cool enough to put through a blender.  Blend with about 1/2 of the cooking liquid until smooth.  Press mixture through a sieve with a spatula, pressing and stirring until you get all the juice out. Discard seeds and skins.  Set pepper sauce and remaining soaking liquid aside.
Brown the stew meat by tossing lightly in flour that has been seasoned with salt and pepper. Try to shake all excess flour off of meat before putting in the pot. Get vegetable oil hot over medium-high heat, and brown meat about 2 minutes per side until you get a bit of color. Brown meat in batches, removing to a plate when done. If you get excess flour residue in your pan, you can use a paper towel to carefully wipe it out.  Don't burn yourself like I do.  Add oil as needed to keep the bottom of the pot covered. After all meat has been browned, wipe out bottom of pot if flour has started to blacken.  If left in there to burn it can make the dish bitter.
Add oil if needed, then saute onions until golden and soft, about 5 minutes.  Add cumin, garlic and sugar.  Cook a minute more.  Add pepper sauce, oregano, beef stock and reserved pepper liquid. Add meat and any accumulated juices.  Stir to combine.
Bring Chile to a boil, then reduce heat to a low simmer and let cook, covered, for one hour. Remove lid and cook uncovered two more hours, stirring occasionally.  Adjust temperature as needed to maintain a low, slow bubble.
Serve Chile by itself, or over rice, with warm tortillas. Top with shredded cheese and minced onion.
Serves 4-6 easily, or 2 with lots leftover for freezing.
Posted by Kelly at 4:44 PM