Coney Dogs are one of those foods... I know they're bad for me, but I love them anyway.  An original Coney, or a Michigan dog, is a chili dog of the highest order.  It's a beef and pork hot dog, stuffed into a natural casing, and served in a freshly steamed bun.  The dog is topped with Coney Sauce, which is more of a rich, viscous sludge, than a chili.  The sauce is followed by mustard, and chopped onions.  I have yet to meet a Michigan expat who didn't get misty eyed when you brought these things up.  Similar to euchre, or holding your hand out like a mitten to point out which part of the state you're from; it's one of those things you didn't know you'd miss so much.

Who makes the best hot dog and sauce is hotly contested.  Are the onions under, or on top of, the sauce?  I'm not really interested in that debate.  I miss Coney Dogs so much, it would be tough to quibble over their subtle differences.  I crave this food like no other food.  All attempts to satisfy this craving locally have left me feeling sad, and homesick.  I'd happily eat at National, Lafayette's or American; all brands resonate equally in the stomach of the coney-deprived.
The last time I was in Michigan, eating at a National Coney Island with my mom, we realized you could have a kit shipped to you.  While wiping a glob of sauce off my chin, I wondered how I had failed to consider something so obvious.  It was like a choir of angels was singing.  True, the angels were overweight, sweating through their sauce-stained undershirts, and spewing crumbs, but that made me no less grateful for the revelation.
Mom sent my husband one of these kits for his birthday last month.  For a man who is notoriously hard to buy gifts for, it was a score.  His surprise, his smile of delight, his wife giddily bouncing up and down in the kitchen.  It was a beautiful moment.  I have to confess, it was possible I was more excited than him.  We cracked a beer, and toasted our good fortune.
I have only one complaint about National's Coney Kit.  They sent us two packs of dogs, two bags of buns, even mustard and onion...but only one container of sauce.  Now I am faced with a dilemma.  Do I simply order another container of coney sauce online for the reasonable price of $5.95, or do I attempt to recreate the original at home?  The decision really isn't that hard to make.  I have hot dogs defrosting, and I want to eat them today.


Let's break it down...
The absolute, most important part of the Coney Dog, is the chili.  It does not have beans, it's heavy on the cumin, and has a creamy texture entirely unique to Detroit-style coney sauce.  It's sticky, and the beef is cooked down to the point of disintegration.  I struggled to figure out how the meat could be not just tender, but almost liquefied.  I did some research for coney sauce recipes and noticed that several of them direct you to NOT brown the meat before adding the rest of the ingredients to the pot.  Interesting, I've never done that before.  But then it started to make sense.


By not browning the meat first, would you prevent it from clumping up, and making the chili too chunky?  Further, not having the opportunity to drain-off the grease after browning, as most of us would instinctively do, would add additional fat to the sauce; thereby increasing it's creamy stickiness.  The fat idea is validated by the addition of vegetable shortening, or lard - EEK!, to many of the recipes I found.

Additional suggestions include placing the ground beef in cold water, letting rest in the fridge for 30 minutes, then draining and cooking.  Others claim the only authentic way to make this chili is to use a combination of ground beef hearts, ground hot dogs, and cracker meal.  I think I'll skip the beef heart etc. and just try the water method.  But that's just me, if you really want to cook a beef heart, have at it.

I'm using a recipe from my stepmother as a jumping off point.  She cannot remember it's origin, but knows that it's more than 30 years old, and from somewhere in Michigan.  It's similar to many recipes I found online, and as good a place as any to start.

Cook for 30 minutes, do not brown beef before adding other ingredients.

I soaked the ground beef in water for 30 minutes.  I've never put ground beef in water before, and simply said, you don't want to see that part.  I could make all sorts of unfortunate comparisons, but I will restrain myself.  I then drained the water off, and put the meat in the pot.  Then I dumped in the rest of the ingredients.  The soak, however visually unappealing, was a good idea.  The ground beef broke down into tiny, tiny little pieces, just like I wanted. 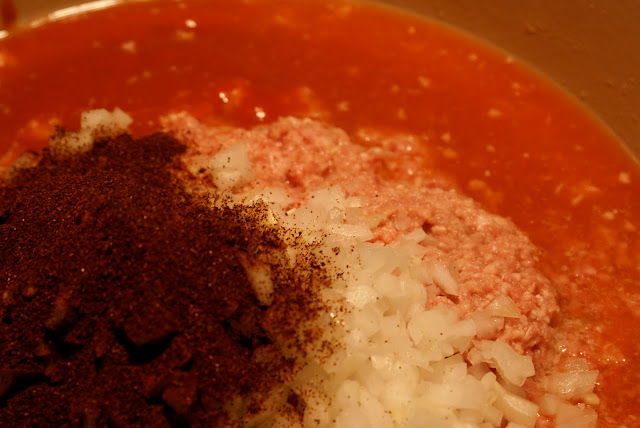 I have a feeling once I get this up to temperature, and a good simmer going, I'll to want to add cumin and mustard. 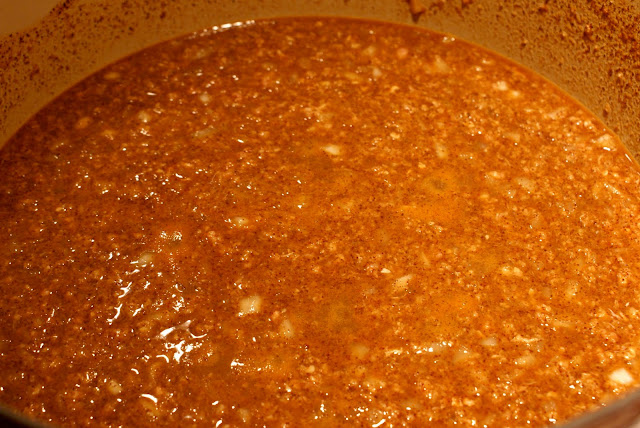 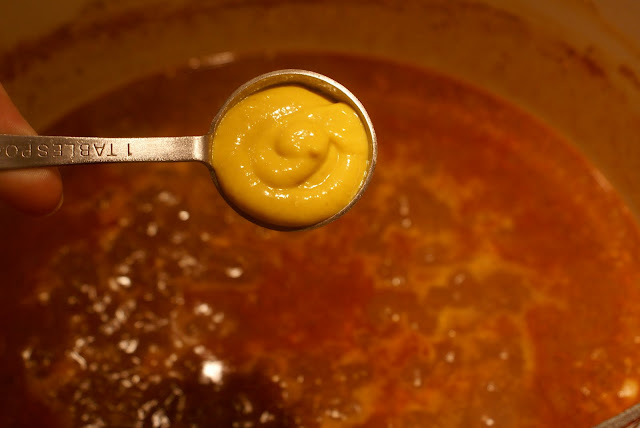 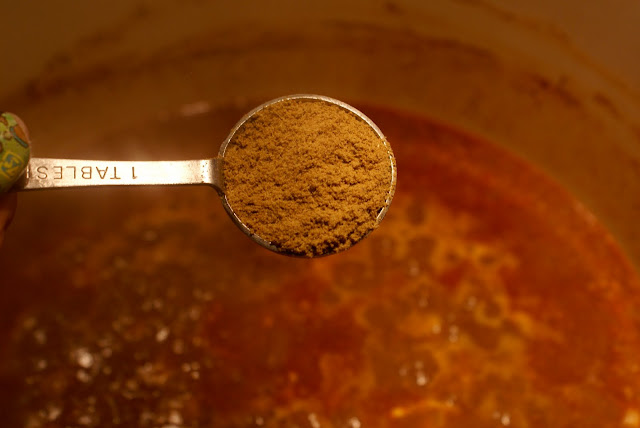 I know, that seems like a lot of cumin, doesn't it?  I thought so too.  But it's working. 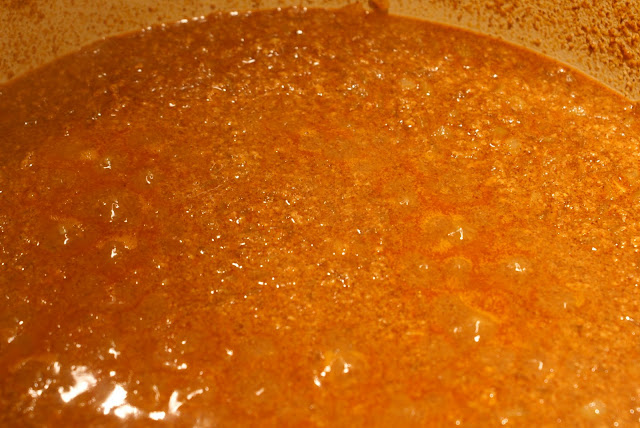 And now comes the vegetable shortening.  I hoped this ingredient would be a last resort, and simply cooking-down the sauce would get me the sticky texture I was seeking.  I was wrong.  See, there's a reason refried beans taste so much better when you eat them in a restaurant.  There is lard, or shortening, in those beans.  It's the same way with this chili.  You don't get that sort of mouthfeel unless there's a lot of fat.

I added the shortening slowly, tablespoon by tablespoon.  It was about 12 T total, the last two of which I mixed with a little flour.  This final step brought the chili together, and transformed it into the sticky, sludge-like sauce I was looking for.  Despite whatever reservations you may have about vegetable shortening in your chili, as you likely should, this stuff is gooooood.  This is the closest I have ever had to "the real thing," without traveling to Michigan.
Now it's dog time.  Heat a skillet to medium and add 1 T of vegetable oil.  Roll the dogs around every few minutes, and they'll be done after about 20.  We liked the National Coney Island dogs fine, but honestly, Nathan's or Hebrew National are just as good. 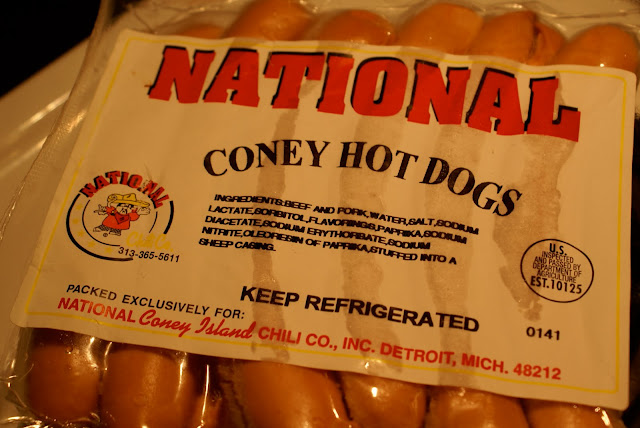 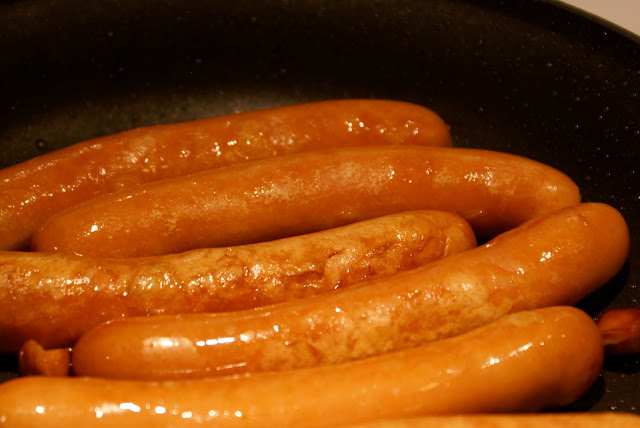 And there you have it; Michigan style Coney Dogs, direct from my Seattle kitchen.  I give it a 90%.  That's not too bad, considering the alternative includes long distance air travel.  And since I'm uninterested in experimenting with beef heart, I am happy to make do with what you see here.  This Coney Dog satisfied the craving, and that was the goal.  I feel like I can go another year before having one again.  After what we've learned today, about our beloved special sauce, once a year is probably just right.

Soak the ground beef in cold water, in the fridge, for 20 minutes.  Drain.  I used a colander lined with a sheet of paper towel, as the pieces were small.  Put everything but the shortening in a pot and cook for about 30 minutes.  Stir occasionally.  Do not brown beef before adding other ingredients.  As the sauce cooks down, add shortening, and shortening/flour mixture, until you get a thick, sticky texture.  If you're not a freak about true, Michigan-style coney sauce, do what you will with the shortening.  You might be healthier, but I am sated.
Posted by Kelly at 1:32 PM